How To: Stoke Another Rider 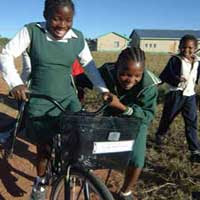 We’ve been using our Monday posts as instructional, ‘How To’ kind of things and, since it's that time of year when everyone is getting their new gear together for the season, we thought we’d let you know how to help someone else get out on a bike. That pair of $6000 Lightweight wheels? A $12,000 Di2 outfitted Pinarello? A closet full of $350 Assos shorts? All things that are awesome and will definitely make your next ride faster and more fun. Still, if you’re able to peel just a little bit of that cash off to get someone that might not have nine bikes hanging in the garage out on two wheels, you’ll see how awesome it feels to make riding easier or possible for someone.
Here’s a few groups that we’re 100% behind and that directly result in more people riding:

High School Mountain Bike League
I was lucky enough to spend a few days with Easton’s Chuck T. at their factory in Mexico last week. Chuck started racing in the 70’s and talking with him really reminded me that, when we were kids you had to be a freak to want to race bikes. No normal kid would ever take up cycling. It’s no shocker that we were treated like freaks at school. Imagine having the nerve not to play a ball sport, to shave your legs, to pass up on pizza and chocolate treats because you were keeping an eye on your weight (OK, I never did that last one).

Luckily, being treated like a freak because you want to go for a three hour ride after school is not as much the case any longer. Especially here in Northern California where the NorCal High School Mountain Bike League has made cycling almost as cool and popular as basketball, football and baseball—well, I know for sure we’ve got lacrosse beat! So, the incredibly popular NorCal program is branching out across the country with the National Interscholastic Cycling Association (NICA) and the promise is that they’ll do the same thing they’ve done here elsewhere in the country.

If you’re in the SF Bay Area, you can come out to the first-ever NorCal Super Bowl fundraiser, the Dirt Bowl at Camp Tamarancho in Fairfax this Sunday (February 7th). If you can’t make it out, it’s pretty easy to donate to either the NorCal league or the new National High School Racing Organization through their websites.

Bikes In Africa
Both Mill Valley pro Scott Zwizanski and I have done trips to Africa to support bike related programs there. His was for SRAM’s World Bicycle Relief mine was for Bicycling Magazine’s Biketown. Sure it’s tough to round up the money and time to go to Africa to help first-hand, but there’s a ton of different ways to donate and many will directly result in a bike that will go to someone in an emerging economy that probably doesn’t have much more than the shoe leather express right now.

Kona bikes of Vancouver got involved in Africa through Bicycling Magazine’s Biketown program a number of years ago and they’ve developed their own African bike program that has gone way beyond what anyone ever imagined. Kona helps you help out in a number of easy ways: You can ride for the Kona Bongo Bongo team and raise money with every pedal stroke you take. Or, for every two $449 Africa Bikes sold, Kona will donate one bike to a person in need of basic transportation in Africa—so spend a little less than a grand on Africa bikes and you’ll be directly responsible for someone in Africa getting new wheels. You can buy also help to put some fuel on the African bike fire by buying a Kona basic needs T. Kona Africa Bike

You can also donate directly to Bicycling Magazine’s ongoing Biketown Africa program (which is run through the non-profit foundation of their parent company, Roadale Inc.). Bicycling has a full time staff member on the ground in Africa with the sole purpose of coordinating bikes and training for people in need. Their program in Botswana has helped home healthcare workers see as much as six times the number of people per-day that they were able to see by walking.

If you want to work with the one organization that has made the greatest number of bikes available in Africa, you can make a donation to World Bicycle Relief. Just $134 will put a sturdy, purpose-built bike on the ground in Africa. That’s about the price of a good tubular from Vittoria or Continental and it’s for a bike that will definitely have an effect on someone’s life. World Bicycle Relief is incredibly organized and, due to their size, able to leverage government resources that smaller groups simply can’t take advantage of. They’ve got a proven track record and they’re incredibly driven people. World Bicycle Relief

Trips For Kids
From what I can tell, Marin County’s TFK was the original non-profit aimed at getting kids on bikes. The organization goes all the way back to 1986 and, more than just getting at-risk kids on bikes, TFK also teaches kids how to work on bikes, takes them on trips and teaches them a range of other skills including computer learning.

Lot’s of ways to help Trips For Kids. You can donate gear to their Re-Cyclery bike thirft shop in San Rafael, donate time (they always need help with trips and after school programs) or give ‘em some cash.
Thanks for taking the time to listen, hopefully you can toss a little in the hat to get someone else on a bike this spring!